Two old internal shots sent to me by Keith Bowen: 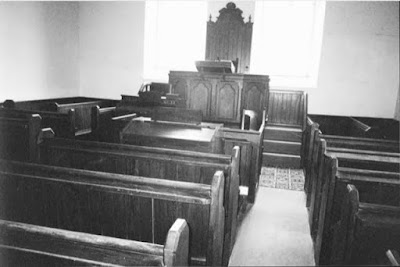 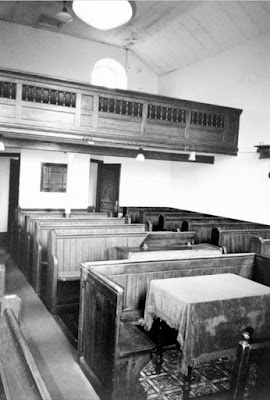 Posted by Ruth Roberts at 07:15 No comments:

Email ThisBlogThis!Share to TwitterShare to FacebookShare to Pinterest
Labels: Old Pictures inside Bwlchgwynt

On high ground, some three miles south-east of the lively village of Whitland, stands the Baptist Chapel that bears the name above this script.  The majority of the residents who live in this community are diligent and industrious farmers.  It is very rare for any of them to move from their places, which shows the settled character of the tenants, and the geniality of the landowners.  All the inhabitants, as a rule, live well and in comfortable surroundings.  I do not know of even one in the neighbourhood in need of bread; but I know of many that live in abundance and sufficiency.  It is fairly (or very) infrequent that auctions occur in Ciffig Parish (the parish where Bwlchgwynt stands), this, says a farmer, staring directly at me the other day, is surely a good sign.

This church is a branch of the respected church at Molleston, near Narberth, Dyfed, which at present is under the care of a good and kind brother - Thomas Evans, grandson of the unforgettable Dafydd Evans, Ffynnon Henry.  When Bwlchgwynt was first built, which took place in the year 1756, one Evan Thomas was ministering in Molleston.  He was ordained on 4th September, 1726.  In October 1794, nineteen devout members were released from Molleston, and two from Rhydwilym, to form the church at the 'Bwlch'.

The preaching festival was held here once, on the 10th and 11th June, 1817, where the renowned preachers Morgans, Newcastle Emlyn; Timothy Thomas, Aberduar; J. Herring, Cardigan; Joseph Harris (Gomer), Swansea; Henry Davies (Senior), Llangloffan; J. James, Pontrhvd- yrhyn(?); and Christmas Evans preached.  All these 'giants' have passed away; but even though they have died, they still speak.  The above festival was held in a field belonging to Ffynnoncyll Farmhouse, where the late John Bowen made his home for fifty years.  Christmas Evans preached about Jesus casting out demons from the man possessed in the country of Gadara; and the influence was in agreement with the tradition that the Word from his mouth was indescribable, the late John Bowen, who was present, told me.  When I read the history of Christmas Evans, Gomer Fawr from Swansea, and others who adorned the garden of mankind, and beautified the firmament of Christianity in the first half of the present century, some strange/wonderful but pleasant attachment possesses us and we are inclined to pray 'Let the spirit of these renowned preachers be on us in these days'.

There were branches of Bwlchgwynt at Bwlchnewydd and Nazareth, Whitland.  Even though these of necessity had diminished the number of members and listeners at Bwlchgwynt, yet I am glad to declare that the last is holding its own.  There is a numerous assembly as a rule every Sabbath Day.

For quite a while, the chapel has been in a wholly unsatisfactory condition - the seats are old and loose, and the floor is uneven and brittle.  This was putting the Worshippers under a great disadvantage to worship God.  There has been much talk of repairing, and that was all that happened for quite some time; but at last the decision came to reseat the floor and to paint the gallery(?).  Before starting on the work, the whole brotherhood was asked for promises regarding the expense, and it was found that all were ready to give and eager  to help.  Having done this, it was seen that 'We need not worry about other jobs, only the intended repairs'.

The work was given out to James Thomas & Son, Aberhenllan, near Carmarthen.  The work was done under the supervision of John Thomas, the son, and he did his work well, worthy of praise.  In addition to that already said with an eye on the collection, it can be said that the secretary went out to the neighbourhood, in the company of two responsible brothers from the church, and found everyone to be kind and ready to help.  Various others took from the (?) and the congregation books to collect, and they all did exceedingly well.

The Opening took place on Tuesday Evening and Wednesday, 23rd and 24th October.  One of the reporters of the South Wales Daily said, 'The 24th October '83 is a long-remembered day in Cardiff.  That day the South Wales College was opened there; and on the same day the beautiful and handsome Bwlchgwynt chapel was opened.  Therefore it is unlikely that we shall forget this day.  The weather was not as we would have wished; even so, we had excellent Preaching Assemblies.

Tuesday Night, the service was started with the Rev. G. Griffiths, Newcastle Emlyn and the brothers Davies, Bwlchnewydd, and Davies, Login preached.  Wednesday morning Williams, Mydrim took the reading and prayer; the preaching by 'faiths', Newcastle; Williams, Carvan (in English), and Thomas, Tabernacle, Carmarthen.  At two (o'clock) Edwards, Ffynnon addressed the assembly, and Jones, St. Clears preached in English, and (Thomas?), Carmarthen in Welsh.  At six (o'clock), Favies (M.C.), Whitland took the start of the service; and Griffiths, Newcastle and Wil(?), Salem preached.  This was how ended the best meetings they had been to.  The preaching was detailed and in the tradition skillful and effective, the congregation attentive and seemly.  The collections also were very heartening, there remain only a few pounds of the debt not yet paid when the promises have come in.  Well done, Bwlchgwynt.  Now, here we have one of the most beautiful chapels in the whole neighbourhood.  It is lit by nine lamps, and the seats and the platform of the best pitch pine.  The vestry also has been well set-up.  In a word, everything here has been totally renewed, such that the old Bwlchgwynt has become a new Bwlchgwynt.  The brotherhood and the neighbourhood has shown great kindness, in lodging and feeding the ministers and strangers who came to the meetings.  May the Lord repay them abundantly for their generosity, and may the good effect that follow these opening meetings continue.
Whitland.   J. H. MILES

(This was a Welsh article found by Keith Bowen and emailed to Glyn Macken of Dyfed Family History Society for help with the translation and within the week had the English version, provided by another member, Geraint Davies, to whom Keith and I are extremely grateful.)
Posted by Ruth Roberts at 04:46 No comments:

The Vestry
Posted by Ruth Roberts at 04:40 No comments:

Email ThisBlogThis!Share to TwitterShare to FacebookShare to Pinterest
Labels: Chapel & Vestry to Rent

Some pictures have disappeared

Because of the change of conditions regarding Photobucket lots of my picture links got broken.

I have replaced some pictures but some are still needing to be found again.

I hope it does not spoil peoples enjoyment of the is blog.
Posted by Ruth Roberts at 09:16 No comments:

Posted by Ruth Roberts at 09:14 No comments: 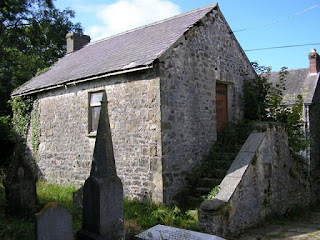 Rear of Vestry by graveyard.
c. Pearl and Bill Harries 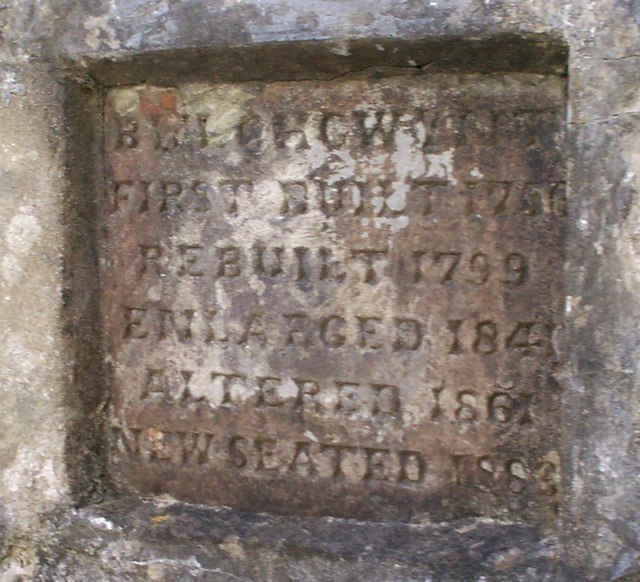 
KYFFIG, A CHAPELL OF EASE TO LACHARN
The walls of the Chancell & Church should be new rendred. The Glass-windows mended & the floor made even. No Canons, Homilies, nor Table of Degrees. No house nor glebe for the Minister. [f. 35] Mr James Morgan Curate to Mr Philips, who lives at Llacharn the Mother Church & is diligent in his duty there, is resident here . 75  Mr Morgan has the small Tyths to his own use, & besides 20 £ a year out of the augmentation made to Lacharn paid at four quarterly payments. Prayers are read here once every Sunday, & every other Sunday here is a Sermon in Welsh or English. The Children are catechiz'd every Sunday. There are in the Parish two dissenting Families. There was a Meeting house here about 3 years since, but upon proceedings against the Preacher at the Quarter-Sessions at the charge of Mr Philips for serving more Congregations than one, this Meeting was & continues to be deserted. Bread & wine at Easter found by the Impropriator. Communicants at Easter about 60. at other times from 10 to 20. Families in the Parish about 60. An Ash growing out of the wall & Ivy on the (Church, deleted) wall at the west end of the Church, & Ashes growing in several places out of the wall on the South side & at the east end of it should be destroy'd & the wall new pointed.
Posted by Ruth Roberts at 03:38 No comments: