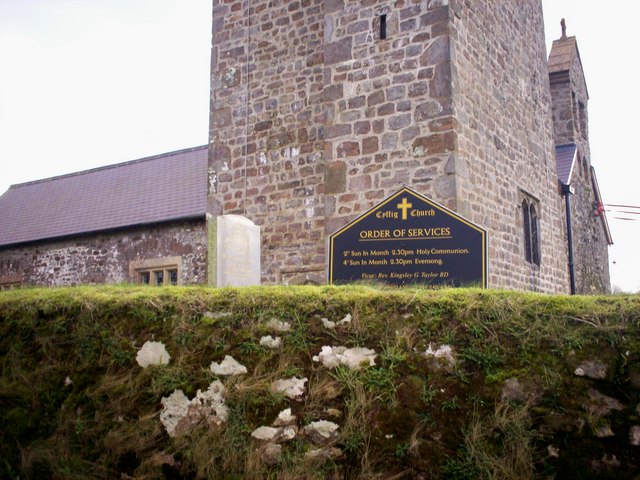 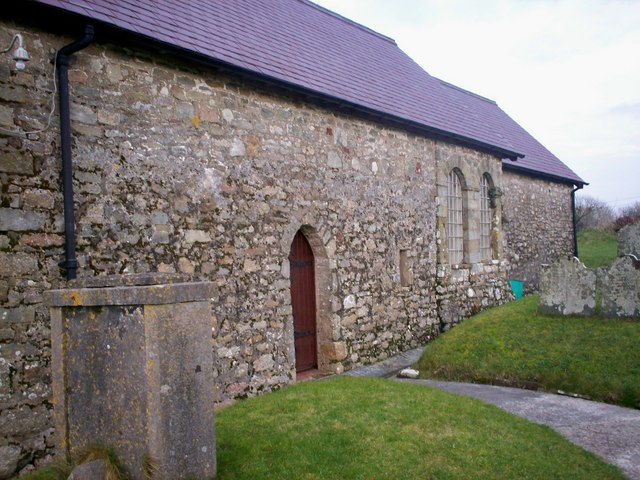 The following is from a small booklet published in 1986 by Pauline Houseman entitled A Historical Guide to Ciffic.

Some History
The Book of Llandaff (written in the 12c from older documents) mentions Lann Ceffic as having 105 acres of land.
The earliest part of the church is 13c (Nave area) but it was rebuilt in the 15c.  It was remodelled after the Owain Glyndwr uprisings, the Chancel was added and a new Aisle added to the north - the rough arcade of three arches was made by piercing the original walls.  A massive tower was built on the west end.
There has possibly been a place of worship here for 1300 years.
There is no evidence that it was ever called Saint Cyffig or even Llangyffig. 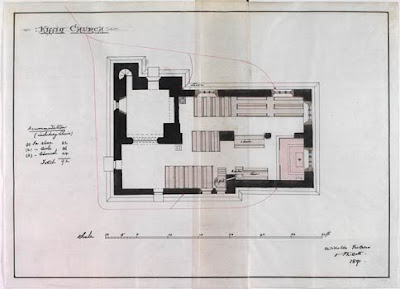 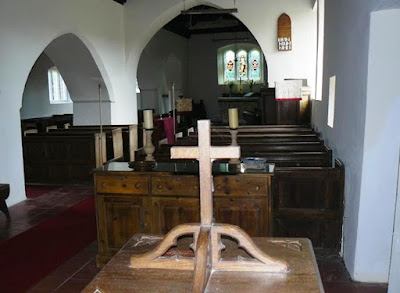 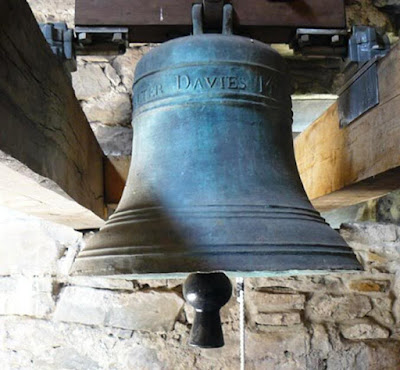 c. CMC-ECA
There is one bell, inscribed Walter David (Davies?) Minister 1793.
The font is possibly from the 13c but has bene redressed.  The font cover is from 1973 in memory of Stanley Brace, Blaenffynnonau.
The south west door is not now used, there is evidence of a porch being once there.
There is a stoup to the right of the tower arch and a squint behind the pulpit.
To the right of the entrance gate is a stable (restored in 1978) which had at one time been used by the vicar to stable his horse.
One stone behind the east end of the church is a memorial to five children of Maurice and Amelia James Old Pale who died between 1871 and 1878 - all aged under 7 years.
In 1710 prayers were read every Sunday and evry other Sunday there was a sermon in either Welsh or English.  There were about 60 families in the parish.
Ciffig became independant of Laugharne in 1777 and the curate became the vicar.  He was paid £8 a year - half on Lady Day and half at Michaelmas - in the church porch between 9-11am.
Both Ciffig and Marros Churches were in receipt of Queen Anne's Bounty (for impoverished clergy).
In 1790 it is recorded that the church had two bells - 'one fell down'.  They also had a bier and black hearse-cloth.
In 1914-18 the regular congregation was around 30.  By 1930 it had fallen to about 6, but then the numbers increased again.
In the early 1920s Rev'd John Evans lived at the Vicarage in Red Roses and would walk the old paths to Ciffig Church - he handed Ciffig over to Whitland in 1925/6.  This broke the connection with Laugharne which went back to at least 1563.
In the 1980s services were held at 2.30pm every other Sunday.
Electricity came to the church in 1959 when lights were installed in the South Aisle, ceiling heaters were fitted later.  The North Aisle did not have lights until 1982/3.
In 1966 some restoration was carried out - the wooden partition at the base of the tower was rotten and replaced with  a stone wall.


Some Memorials Inside the Church
Opposite the south door by Robert Walters in memory of his wife, her parents William and Jane Jones of Sick (Syke) Farm, Red Roses.
Wiliam died aged 91 and Jane 100 years a few months apart in 1811.  The death of their 11 year old son is also commemorated.
The memorial was erected in 1814 (Robert lies under a stone to the east end of the North Aisle).
Nearby are the remains of two brothers aged 19 and 21 years who died within a few days of one another in 1775. 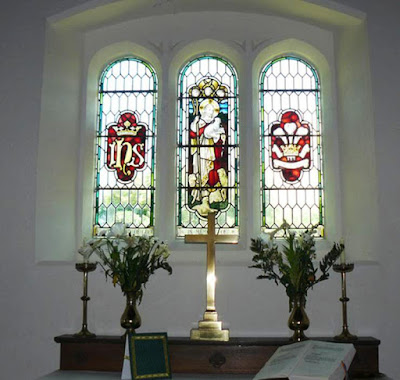 c. CMC-ECA
The East Wondow is of three lights:
Left - crown and IHS (Jesus Saviour of Man)
Centre - Jesus the good shepherd
Right - Badge of the Welch Reg, Prince of Wales feathers and Ich Dien - I Serve
Underneath is the motto of the regiment:
Gwll Angau na Chwilydd- Better Death Than Dishonour.
In memory of:
Cpt. Howells of the 8/5 Battalion Welch Regiment died of wounds on the 10th August 1915 on the hospital ship, Valdovic, off Gallipoli.  His name is inscribed on the Memorial at Helles, Turkey and who lived at the White Lion.  The memorial was from his father, William John Howells.
This window was made by the same craftsman who constructed the east window at Marros Church.

Additional information from Mrs Pearl Harries - Cpt. Howells was a pupil at Tremoilet School, then went on to Whitland Grammar School and later Aberystwyth Uni where he gained a  BA with Honours. He then moved on to work in Lampeter College before enlisting in the 1914 war.
Posted by Ruth Roberts at 00:59